The Smith / Baldwin House is a Federal style, two-story post and beam constructed house built in four stages. The central portion of the current home was completed in 1811 by Dr. John Joline Cobb. The first floor consists of a side hall, front parlor and dining room with nine-foot ceilings and two fireplaces. The second floor contains two bedrooms, each with a fireplace and a small bedroom off the hallway. Hiram Smith, Jr. purchased the house in 1833. In 1854, the Smiths demolished an adjacent kitchen wing that was likely from the late 18th century and built a west and east wing, both completed by 1856. After Hiram's wife, Mary, died in 1872, his son Richard, built an addition to the rear of the west wing that consisted of a kitchen, laundry room and possibly a lavatory. A one-story addition to the west of the western wing, possibly related to the Smith's dairy business, was likely built at the same time. It was demolished by 1900 and replaced with a covered side porch. Soon after Richard's daughter, Marjorie, was married in 1902, the front door was removed and the roof on the west wing was raised, adding a third floor with two bedrooms. Close to the same time, a summer school for children was run in the home by Mrs. Emily Smith and her daughter Emily.

Family History
Hiram Smith Jr. (1799-1865) and Mary Allen Osborn (1802-1872) were married in 1822 and produced ten children during their marriage. In 1833 they purchased the house and moved in with their children and Hiram's father, Colonel Hiram Smith.

Colonel Hiram Smith (1756-1833), a Veteran of The American Revolutionary War, was a man of affairs in his time and community. He was a Justice of the Peace, 1788-1793; member of Assembly, New Jersey Legislature, 1791-1792; Sheriff of Morris County, 1794-96; County Judge 1800-1805; Major of First Battalion of Fourth or Lower Regiment New Jersey Militia 1793-1800; Lieutenant Colonel of same, 1800-1801; and in 1806, one of the incorporators of the Newark and Mt. Pleasant Turnpike Co. He was a member of the first board of trustees of the Presbyterian Church of Parsippany elected March 21, 1787. He and his sons were major contributors toward the erection of a new church edifice in 1828. His first residence was on a bluff near the saw mill now a part of the Troy Industrial Complex Site. Col. Hiram Smith, his wife Eleanor Alling Parrett (1760-1810) and children moved into the house built by Eleanor's father, Samuel Parrett (1716-1780), about one half mile south of the home built by Dr. Joseph Parrett. The house was built on the original Alling family homestead property.

Hiram Smith Jr. was a wealthy man in his time. He ran a successful dairy farm and bought and sold property. Upon his death he owned more than 200 acres on South Beverwyck Rd., and additional acreage in Troy and Montville. He died in 1865 at the age of 66 and left his estate to his youngest son Richard Smith (1838-1891).

Richard Smith and his wife, Emily S. White (1848-1904), a Mayflower descendant, had two daughters Emily Caroline Smith (1876-1956) and Marjorie White Smith (1878-1952). Upon Richard's death in 1891, the house and property was transferred to his wife Emily. She died in 1904 and the house and property was equally divided between the two surviving daughters; Emily Caroline Smith and Marjorie Smith Baldwin. In 1909 Emily sold her half of the estate to her sister Marjorie.

Marjorie C. Smith (1878-1952) married William E. Baldwin (1875-1952) in 1902. They had five children; Bleeker, Emily, Adelaide Bates, Elizabeth Smith and Richard Smith. Upon the death of Marjorie and William Baldwin in 1952, their estate was transferred to Richard Smith Baldwin and his wife, Mildred.

In 2013, the Township, in recognition of its historic significance to the Township and its access to Troy Brook, purchased the property using open space preservation funds. The building and grounds is cared for as a historic property and will also be available for use by the Township for functions and educational uses through access to the house and the brook. 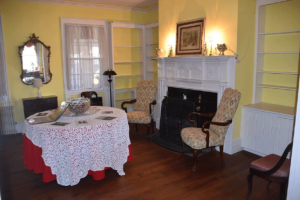 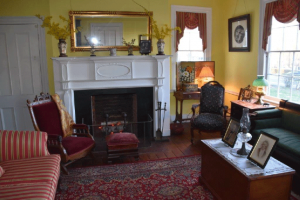 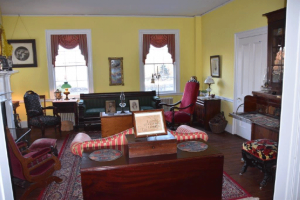 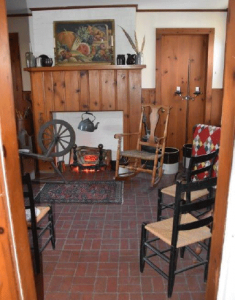